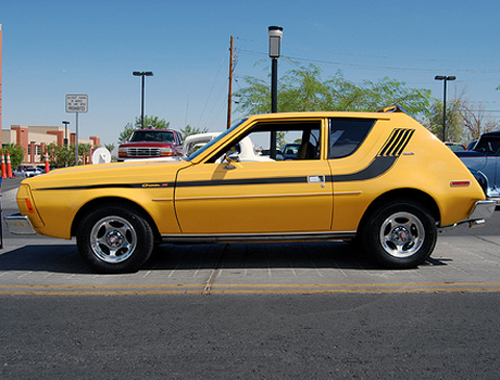 The 6 Worst Cars of All Time

Over the years, there have been many cars that were absolute disasters.  There was the 1974 Ford Pinto which would explode if you got rear-ended?  Sounds like a safety hazard to me.  How about the AMC Gremlin?  The Gremlin is probably one of the ugliest cars I have ever seen.  But what are the true worst cars of all time?  Let’s find out.

The Pacer was a true disaster.  “0 to 60 in four-and-a-half hours.”  This car looked like a fish bowl and leaked like crazy.  One rainy day would turn this car into a driving rust machine.  Just look at it.  Who would even buy that thing?

As I stated earlier in this post, the Ford Pinto was a driving death machine.  Have you ever been rear-ended?  Well if you got rear-ended in this, you were up in flames.  To go along with the explosions, this car is as ugly as ugly gets.  Aerodynamic? Forget about it.  Just try your best to get home every day without blowing up.

Another ugly piece of machinery.  The Chevette was an absolute piece of junk.  It fell apart after about 40,000 miles and caused the most unhappy customers out of any other car.  “It was so under powered, you had to down shift if you had the air conditioning on the climb the slightest hill.”  The 51 hp engine barely got you anywhere, despite how tiny the car was.

A list of the worst cars of all time is never complete without the Ford LTD.  In this car, you felt extremely close to the ground.

The LTD was a very heavy, clunky car.  The suspension was the worst part of this car.  You could feel every single pebble that was on the highway.  A PEBBLE would make the whole car shake.  As you can imagine, that would be a very uncomfortable ride.

Can someone please tell me where the back half of this car is?  Seriously, it looks like someone chopped off 30% of the car.

Not only was this car disproportional, but it was also awful to drive.  It had a heavy six-cylinder motor along with choppy handling that would jerk every which way.  I mean come on, “The Gremlin”.  AMC did not really think that a car with the “Gremlin” was going to be a best-seller did they?  Needless to say, the Gremlin put the final nail in AMC’s coffin.

The Yugo was the car that would rust and fall apart while you drove it.  The electrical system would sizzle at random times and the engines were know to blow up for no apparent reason.  This car was absolutely terrible.

Well that concludes my list of the worst cars of all time.  These cars were the worst of the worst and should have never been allowed on the road to begin with.  They were truly awful pieces of machinery.

Next article10 Fastest Bikes in the World